Since the deadline for Summit 2017 Proposals has been pushed back to April 30th, I thought I would write a post about some of the best and worst feedback I have received at the many events I have had the privilege to participate in over the years.

Before I go any further, I figured I better explain the picture that I used for this post. This is a picture of me…in 4th grade. I would say it is one of the worst pictures of me out there…but I’ll be honest…there were a lot more valleys vs. peaks regarding my many school pictures before and after this one was taken. I will explain how this relates to this subject in just a minute.

I want to first say that I love public speaking. I know it scares a lot of people and I appreciate that fact. I just wanted to first say, that I absolutely love it.

The most common feedback that I receive is that I talk too fast. I know this is true. I often tell clients that my “Price-Per-Word” is much cheaper than other consultants. Over the years, I have worked on slowing down. I will tell you a couple of my “tricks”:

The second item I have received in feedback is that the images are too small to read. Here is how I have dealt with this:

The last bit of advice I have is to just face the “criticism” face on and talk about it in your intro and conclusion. I will often tell people that I know I talk too fast and that they can let me know if I need to repeat something. I will make a joke about it…but I am being honest about a “weakness” and they are much nicer when I tell them about it in advance. I also tell people that if they cannot see the screen, move forward.

Now, I will explain my picture. Last year at GPUG Summit in Tampa, I was over the moon! I had maxed out rooms for all of my sessions. I met the best people. I won the GPUG All-Star award! It was just amazing. After the event was over, I received my session feedback. In the middle of all the complements and the valid constructive feedback, I had someone say the “speaker was more worried about her hair for pictures that (sic) what she was training.”

I’ll be honest, for a minute and a half I really worried about it. I thought “was I thinking about my hair too much”. It was like all the great comments (about the same session) disappeared.

I decided to send it to some other people that spoke at the event. I got some great feedback and honestly by the time I emailed it out, I was laughing about it.

This year at GPUG Amplify, I shared the comment I received at some of my sessions (when I was reminding attendees to fill out their session feedback forms).  I wanted people in the audience to know that those of us who take the time to get up and contribute sessions want and appreciate their feedback. I just wanted to say that the feedback should be about the content and…that the feedback should in the very least…be nice and respectful. I told them someone said I worried about my hair too much…and then I put this slide up on the big screen: 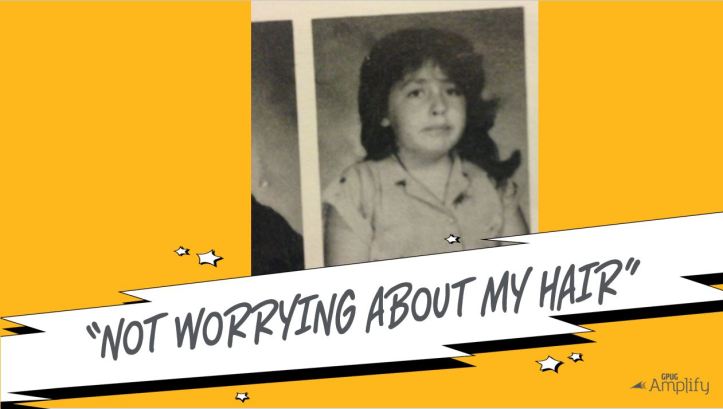 *It looks like I have a small black cat on my shoulder…I do not…I just had really poufy hair that I decided to toss over my shoulder at the last minute. Also, we had color pictures when I was in  school. This is in black and white because it was in my old elementary school yearbook.

When I shared the picture, people laughed…and I laughed…and it just made the negative comment disappear.

Sometimes, that’s all we need to do with unwarranted negativity. Share it with a friend, co-worker, or in my case a room full of strangers and laugh about it. Don’t let one person’s negativity rob you of the opportunity to reach out beyond your comfort zone and try something new! (i.e. submitting a session for Summit 2017!)

The funniest thing happened…when I received my feedback from GPUG Amplify this year…everyone loved my hair:

In conclusion, when it comes to negative feedback: